by the Austin Zombie 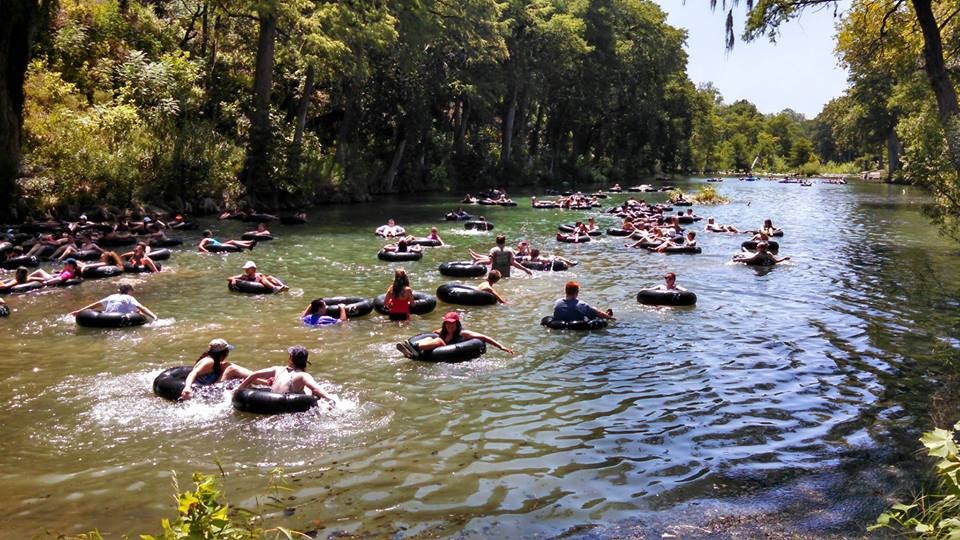 So there I was, just minding my own business. It was a beautiful Saturday morning and I was planning to enjoy it just laying around and doing not much. Angie suggested that the whole family take a trip up the road and enjoy a nice relaxing tubing trip down the peaceful, lazy Guadalupe. Now, I ain’t much of a swimmer but I had been tubing a couple of times and the river was shallow enough that you could simply stand up and walk around in it if need be, so I agreed.

We all loaded up and struck out on up the road. When we arrived at the launch point, we were all pretty excited. After all, it was a hot day and a nice peaceful ride floating down a slow moving cool river sounded pretty good. We all picked out our tubes, strolled out into the shallows and mounted up. After everybody got situated, we began our adventure.

After about 2 minutes into our trip, I realized that I had gotten the wrong tube.

This is what I had hoped for.

I had asked for the super-sized, over inflated, military grade, fully armored, bullet proof tube with the ergonomic hand grips with automatic gyroscopically controlled stabilizers and GPS.

The lady passing them out must not have understood my request, and just gave me a big ole honkin tractor trailer tube with a slow leak.

Oh yea. This is MUCH better.

The hole in this freakin thing was big enough for me and Rosie O’Donnell to share, so my lonesome butt was hanging about 2 feet down through it while dragging across any and all obstacles that that a river might have in it.

At one point, as I was zipping along, it felt like a submerged submarine tried to dock up my rear-end.

I hit something so hard that it bounced my tail right outta the tube and into the river. I jumped up, grabbed my tube with one hand, my butt with the other and tried to reacquaint the two.

(This was not an easy task.)

I looked like a wounded walrus trying to climb on a running elephant. As soon as I would get one leg on the freakin thing, it would shoot me a birdie and flip on top of me causing vast amounts of curse words to erupt from my water logged mouth.

I couldn’t afford a real walrus, so I asked Mimzy to volunteer.

I finally somehow managed to remount and began looking for my group. They had floated on down the river without a care in the world while I was just given an enema by a 4 ton rock and flipped out into the water.

I rolled over onto my belly and began dog paddling to catch up.

The first person I caught up to was my son Austin. I asked him, “Did you not see what just happened to me?” He replied, “Yep. I laughed all over myself.”

I told Austin that we were now tubing partners and would stay together in case my ejection seat decided to suddenly reactivate. He said that was fine with him because he would hate to miss anything else.

The rest of our group had disappeared around a bend in the river so Austin and I were all alone just floating around looking at the back wood scenery.

(I swore I heard a banjo at one point and began to freak out a bit, but I got through that.)

Once we made it around the bend, we had a decision to make. Up ahead there was a little row of bushes, shrubs and such in the middle of the river. You could either float around them on the right side through a little set of rapids, or hang a left and float on smooth water. We opted for the smooth water.

As soon as we started down our chosen path it became painfully apparent that we had made the wrong choice. The water was only about 4 inches deep and was littered with millions upon millions of cantaloupe sized rocks that were hidden just below the surface.

Now, I never saw these cantaloupe-sized rocks, but I felt each one as the bounced off my butt like the drum solo in “Wipe Out”. My teeth were clicking together in Morse-Code spelling out the word “M.O.R.O.N” and my eyes were bouncing around like a pair of dice in the hands of an epileptic gambler. I looked over at Austin and noticed that because of his smaller tube, and smaller butt, he was just gliding along while laughing all over himself.

Once we made it through that, it seemed that the rest of the trip HAD to be smoother.

As we drifted along, just minding our own business, I observed that a fallen tree that was hanging out over the water creating an arch on the right side that went from the bank into the river. I also noticed that Austin was heading right toward it.
I dog paddled over to him and pushed him away only to be sucked into it myself.

As the current grabbed me, I latched onto a tree limb like a screaming kitten being pulled down a storm drain. Well, this seemed to piss the river off so it grabbed me, my tube and my swimming trunks and decided to separate the three of us.

I finally managed to somehow free myself from the raging current and crawled out from under the tree. I immediately realized that my tube was gone and that I was standing buck naked in the middle of river.

Austin had dropped anchor about 100 yards down and was busy laughing all over himself. He had grabbed my tube as it floated by but seemed unconcerned with my missing swimming trunks.

I finally found them snagged on a limb about 20 yards away and walked over to retrieve them. I pulled them off the limb, put them back on and waved at the audience of fellow tubers that was watching the show just off shore. I then walked on down to Austin and he helped me get back up on my tube.

As we came around the final bend, I saw Angie and the rest of our group standing on the bank. She said, “Where y’all been?” I bit my lip.

We were at the end of the trip and it was time to dismount.  Now you would think this would be an easy task because I had been practicing it the whole trip, but as it turns out my little adventure was not finished yet. I couldn’t figure out how to get off of the tube without looking again like a moron.

I trust my wife.

She wouldn’t lie to me.

I rose up, slid off of the tube and immediately sunk to the depths of Middle Earth. I saw 3 scuba divers, 2 ship wrecks, 4 blue whales and a mermaid but I never did find a bottom.

When I finally managed to resurface, it became apparent that the 50 people on the river bank were amused by the “flying butt dive” and “redneck water ballet routine” that I had just completed, because the sound of laughter was all in the air.

Austin was on the bank as well. He was standing beside Angie and laughing all over himself.

I don’t tube much these days. This trip was a real pain in the arse.